My daughter was doing some art today, and I was feeling under the weather, so didn’t go out, and her scissors caught my eye. My first shot was of the tops of the scissors, which are multi-colored, then I tried the shot from the bottom. I liked it better. Maybe tomorrow I’ll get out and shoot something more interesting.

I took this a couple of days ago, but haven’t had time to post it yet. An potential opportunity came up that I needed to prep for, so I had to push the blog to the back burner. Also had some school meetings in the evenings, and so on.

Anyway, this is near Tomales, CA. You can see the exact location on Zooomr. If you zoom in and view the satillite images you can see the footings. I think these are footings from an old railroad bridge, but am not certain. I used a polarizing filter, which really helped bring out the colors. It was kinda hazy the day I took this and I didn’t think the sky would actually come out blue. I took about a dozen shots, some landscape, some portrait. I seem to be favoring portait orientation in this blog, so maybe I’ll have to force myself to take a lot of landscaped oriented photos.
It’s getting harder to find stuff to take pictures of, so I guess I’m going to have to be a little more creative. I’ve scoped out a couple of locations and structures I want to shoot, but haven’t had time. If the rain breaks a little, maybe I’ll go shoot some today.

I spent a night at Indian Springs in Calistoga. I figured I’d take a lot of pictures, but didn’t. Spent most of my time lounging by the pool. The weather was great, pool was hot. January in California. Enough said.

This was in an empty lot between the resort and town, which is about a three minute walk, two if you go through the empty lot. It was early morning, so the sun was casting shadows from the rocks. The curves looked cool. It’s not really circles, but a maze. Zen garden? I don’t know the exact term, but it looks cool. I converted it to b/w in Picasa and adjusted the brightness and contrast a little.

See zooomr for the exact location. Google’s satellite images aren’t up-to-date, I expect this rock maze is temporary and won’t show up ever, but you can see the pool at Indian Springs. Calistoga is cool little town. Very scenic, lots of old buildings. Maybe someday I’ll go back and take more shots.

This is another shot in Helen Putnam Regional Park. Our entire family went for a nice walk through the park. There are a lot of old oak trees in the park. I need to research outdoor photography to see if I can improve my shots of these beautiful trees. See a larger version on zooomr.
I took this yesterday, but didn’t have time to post it, and won’t have time to post a shot for today. I should be able to make it up tomorrow. I expect to take a lot of pictures today and tomorrow. 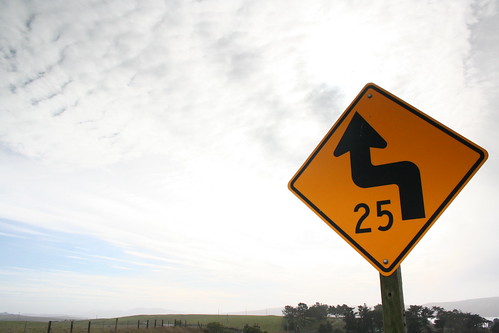 This was taken near Dillon Beach, CA. Something about the way the sign looked against the sky caught my eye. I tried to bring out the clouds in Photoshop, but I must admit I’m pretty much a novice at photo editing. I know enough to be dangerous, but don’t understand a lot of the image adjustments. This came out alright.

I missed a day, it was bound to happen. I caught up today, though. I took this on my way to work. It was late in the morning, but the sun hadn’t hit this spot yet. The field in the background was in full sun with a frosty foreground. It was a nice contrast – frosted white foreground, creek with ice on it, and a brightly lit, green field in the background. All that color and I converted it to black and white.

I haven’t been editing the photos on this blog much, or on zooomr, aside from minor contrast adjustments using Picasa, but this one looked better in black and white. I’ve seen some cool photos that have been edited in Photoshop, so I may experiment a little. My intent was to just post the file from the camera, but sometimes a little correction or enhancement is needed. So far I’ve only used Picasa to make adjustments. Picasa is great. It’s adjustments are pretty rudimentary, but as an organizational tool it is great.
See the geotag and details on Zooomer. Also checkout Skoot’s photos on Zooomr.

Today I was late driving to work, so I took a back road that has less traffic. I dropped into this valley, and noticed a farm house across a frosted field. I quickly pulled over and started shooting. It was early in the morning and everything was still frosty, which I always think looks really pretty in the early morning light. I took a lot of shots, several of which I liked, but this was my wife’s favorite so it makes the blog. You can see a couple of other shots here and here.

I’ve driven through this location dozens of times, and never thought to take pictures. It’s just your average dairy farm, but this morning with the frost and morning light it was transformed. Again, I found a shot in something routine and ordinary. Photography is like that sometimes, at least for me.

I used a polarizing filter on this shot and went for a short depth of field. You can kinda make out the farm house
that caught my eye in the background. I really like the polarizing filter and think it really enhances outdoor pictures. See the exposure details and geotag at zooomr.

I took my daughter for a walk in Helen Putnam Regional Park today mainly just to enjoy the weather. Of course I brought my camera and put on the new Hoya Polarizing filter I got last week. I came across this massive, old oak tree that had a lot of huge branches literally growing sideways, touching the ground. It was an amazing tree that I failed to capture adequately.
Anyway, this was a decent shot of one of the branches.You can get a sense of the size of the braches from this shot. I was standing on the ground, looking down the length of the branch. The diameter of the branch was well over a foot. I have several more shots of the tree; if anyone is interested I can do a supplemental post. The tree is amazing. If you can get to Helen Putnam park, it is on the Panoram trail.
Check out the location, details, and higher resolution images at Zooomr.

This is the picture I wanted to post yesterday, so here it is a day late. My wife does floral design and made this arrangement for our house because we had some friends over. She likes flowers, and they do look good. This was an easy shot to take, the sun was coming through the window from behind. Fortunately the background is blurry because our dining room isn’t that spectacular.

See it on Zooomr with all the exposure settings.

My camera battery died, so I couldn’t transfer the images to the computer and don’t have an AC adapter.Â  I have an image, I just have to wait to post it. We had some friends over and I’m tired, so today’s image will have to be posted tomorrow.Â  At least I took the picture even if I didn’t post it.